The Ministry of Transports, Ports and Civil Aviation – MTPA includes a specific chapter on the Port-City Relationship in the elaboration of the Master Plans of the Brazilian port system. The revision of the Master Plan of the Port of Santos, as well as other Brazilian ports, began in 2017, and includes historical, urban and socioeconomic aspects, aiming at integration and harmonization in the port-city relationship.

The Municipality of Santos, through its Municipal Commission for the Evaluation of Neighborhood Impact, comes from 2017, stipulates mitigating and compensatory measures for projects that generate urban impacts. Port and back-port enterprises that generate conflicts in the port-city relationship are part of this scope. The proposed measures include: effective solution of existing problems and investments in preservation of unprotected areas, urban infrastructure and social, cultural and sporting initiatives, contributing to improvement in the provision of municipal services and consequent improvement of quality of life.

The construction of a viaduct on the Perimetral Avenue of the Right Bank of the Port of Santos – Section 4 will eliminate the existing road-rail conflict in access to a container terminal at Ponta de Praia, in Santos. This conflict creates traffic and environmental problems both in the port area and in the urban area. This project integrates a set that includes densification of port areas, expansion of the railway modal availability and total redevelopment of about three kilometers of Perimetral Avenue, benefiting port and city.

The Bureau of Hydrodynamic Research – NPH, of the Universidade Santa Cecilia – UNISANTA, through an agreement signed with the Municipality of Santos, has been regularly providing climate forecasts used by the Municipal Civil Defense to prevente and/or mitigate damages caused by extreme events, such as hangovers. NPH also provides informations to the Santos Port Pilots, which assist in the entry and exit of vessels from port areas.

The Municipality of Santos implements a pilot project aiming the protection of the edge of the Ponta da Praia neighborhood against the effects of extreme climatic effects and erosive process. Since 2005, this area has been suffering from the effects of hangovers that affect both public and private assets. The technical studies that resulted in this pilot project were designed by specialists from the State University of Campinas – UNICAMP and National Oceanic and Atmospheric Administration – NOAA.

After the large fire occurred in a chemical bulk terminal, located in the Alemoa district of Santos, in 2015, the Port Authority of Santos – CODESP started to study a new access to the Port of Santos in it right bank. The studies have been evolving along with improvements to be carried out in the main access to the city of Santos and right bank of the Port of Santos. The set of works in progress and planned count on the participation of three levels of government: federal, state and municipal, and include works of paving, viaducts, drainage, bus corridors and housing projects.

Note: This project may still have changes!

On March 13, the Brazilian Federal Government, through the Ministry of Transports, Ports and Civil Aviation – MTPA, signed a Memorandum of Understanding (MoU) for technical cooperation with the Port Training Center of Flanders, affiliated to the Port of Antwerp, Belgium. According to this MoU, the Port of Santos will be one of the focal points, responsible for the training of instructors and promotion of courses and practices for an area that includes the Southeast Region (States: Espírito Santo, Rio de Janeiro, São Paulo and Minas Gerais) and the Southern Region (States: Paraná, Santa Catarina and Rio Grande do Sul). The Port of Santos already has the Center for Port Excellence Foundation – CENEP / Santos, which will participate in this process. The Advanced Node RETE-UNISANTA participates in the Technical Council of the CENEP Foundation

The National Federation of Port Operators of Brazil (FENOP) is calling on the Federal Government to create the National Port Apprenticeship Service, in the same way as for commerce, industry and transportation ones. This measure will allow the contribution of approximately R $ 50 million (around USD 15 million) per year, to be allocated to the improvement of skils and competences of the professionals working in the Brazilian port system.

The centralization of the decisions of the Brazilian port system in the Federal Government still persists, due to the changes imposed by Federal Law 12,815 / 2013. In a country with the continental dimensions of Brazil, this definition, which took the deliberative character of the Port Authority Councils, continues against the best international practices, which point to local or regional, professional administration, without interference and political appointments, such as the more efficient model of management.

The “Porto Valongo Santos Program” for the revitalization of deactivated port areas and their urban integration, will have to be reformulated due to financial constraints on the construction of the tunnel, approximately 1,300 m long, initially planned, with the objective of removing the intense road surface traffic. The recent economic crisis and political instability have also contributed to the discontinuation of negotiations for a new redevelopment project. The expectation is that, after the general elections scheduled for 2018 and the remarkable economic recovery, the subject will be taken up in an objective way, solving one of the main port-city conflicts, in an area full of historical and tourist heritages.

Images of the current condition of the area to be revitalized available at:

The Municipality of Santos obtained positive signals from the Ministry of Industry, Foreign Trade and Services to study the implementation of an Export Processing Zone (ZPE) in its territory. According to the especific Brazilian legislation, an ZPE aims to promote the production of high technology primarily focused on exports, and 80% of the products must be destined for this purpose. An ZPE has tax incentives for import and exchange taxes, as well as others which can be offered by state and municipal governments. The Continental Area of​ Santos City has its own spaces for this type of undertaking (over a thousand hectares), provided for in its land use and occupation legislation. Regardless of the implementation of an ZPE, this area is also suitable for the implementation of logistic and / or industrial condominiums, benefiting from the proximity of the Port of Santos and available road and rail accessibility.

Even in the midst of an economic and political brazilian crisis, the Port of Santos sets a new record of cargo handling in 2017, reaching 130 million tons and ratifying its position as the main port of Latin America and the Southern Hemisphere.

Note: The current Coordinator of the Advanced Node RETE-UNISANTA in Santos, Prof. MSc. Adilson Luiz Gonçalves is also a researcher at the Bureau of Port, Maritime and Territorial Research – UNISANTA and member of the Scientific Committee of RETE, is a member of the Port Affairs, Industry and Commerce Office of Santos City Hall, participating directly or indirectly from all the processes described above, whether in the academic or governmental sphere. He is also a member of the Mobility Hub of the Metropolitan Area of Santos Agency and of the Municipal Commission for Adaptation to Climate Change of Santos City Hall. 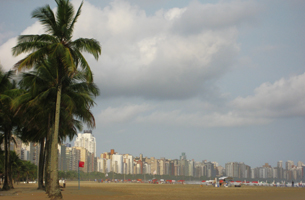