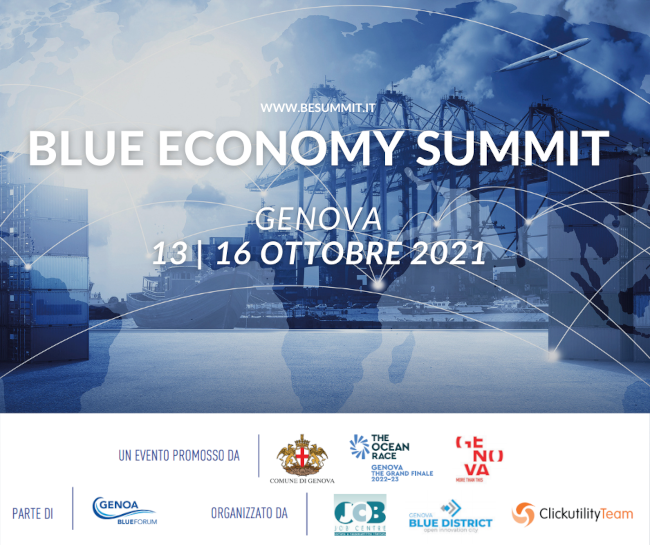 On Wednesday 13 October Massimo Clemente, Director of CNR IRISS and Scientific Director of RETE, and Maria Cerreta, Professor of Quantity Surveying and Evaluation at the Department of Architecture (DiARC) of the University of Naples Federico II, and member of the Scientific Committee of RETE, will take part in Blue Economy Summit, which will be held from 13 to 16 October at the Genova Blue District.

The initiative, sponsored by RETE and CNR IRISS, aims at raising awareness on the development, employment and vocational training opportunities deriving from the Blue Economy, which will play a strategic role in the recovery phase for Genoa and, more generally, for cities and territories with a maritime vocation, in order to overcome the economic setback recorded in the post-pandemic period.

Through a series of events such as conferences, workshops, informative events and networking initiatives, the fourth edition of the Blue Economy Summit aims to promote the synergy between local processes and scientific, technical and entrepreneurial resources for the creation of skills, research, technology transfer and sustainable innovation in the Blue Economy.

After the opening session, Maria Cerreta will present the activities of the Second Level Master Course in Sustainable Planning and Design of Port Areas of the Department of Architecture (DiARC) Federico II, of which she is coordinator, which has activated a thesis workshop with the aim of exploring the potential of the circular city model applied to the city-port system, with attention to the specificities of the context and the opportunities that can be generated. The contribution will be an opportunity to share an example of the experiments carried out.

This intervention will be followed in the afternoon by the lecture by Massimo Clemente, who will present a methodology for investigating the Campania regional coastline based on the vision from the sea, which considers the land-sea system in its unity of marine and coastal landscape. The sea-coast-ports and maritime culture system constitutes a “maritime cultural landscape”, understood as a common good. This implies both the need to involve urban and maritime communities in its care and protection, and the attempt to activate them for the construction of a collaborative governance model for the city-port relationship.

Among the macro-themes addressed in the three-day event:

- Development prospects of the Port of Genoa

- Environment and sustainability of the maritime ecosystem: ideas, safeguard paths involving the protagonists of the Blue economy

- The re-launch of tourism coming from and for the sea

- A sea of opportunities: start-ups and open innovation in the blue economy sector