International experts in port-city integration meet at the 35th RETE Meeting, from 2 to 4 December in Delft (Netherlands) 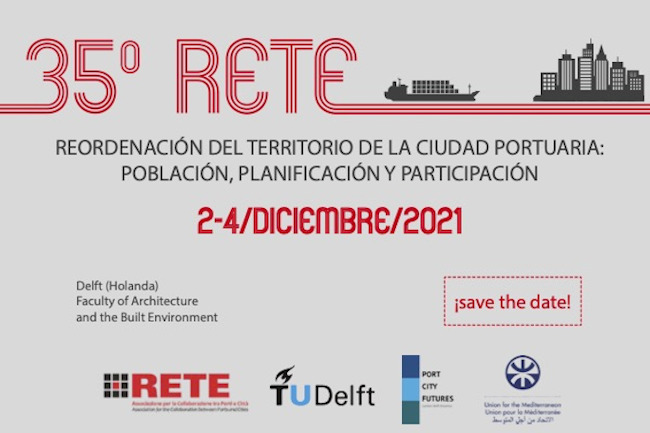 November 26, 2021. Experts in port-city integration will participate next week, from December 2nd to 4th, in the 35th RETE Meeting, that will be held in the Dutch city of Delft.

Under the slogan “ Reorganization of the territory of the port city: population, planning and participation”, this event is part of the environment of PortCityFutures, a research center of three Dutch universities focused on the space, society and culture of the territories of port cities. The meeting also coincides with a meeting of UFM, an intergovernmental institution that brings together 42 countries to promote dialogue and cooperation in the Euro-Mediterranean region.

RETE will bring together during these days the experiences of academics and professionals who work on the role that port cities can play in global challenges, especially in relation to the integration of common spaces and resources. This international association, made up of port institutions, universities and professional organizations, manages an international network of port cities and ports, focused on three areas of preferential action: teaching, research and dissemination.

This 35th Meeting will host the General Assembly of RETE, prior to a program in which representatives of the ports and cities of Rotterdam, Valencia, Livorno and Naples (Italy) will participate; Ferhat Abbas University of Algeria; and University of Manouba, Tunisia, among others.

The president of RETE, Teófila Martínez, assures that “it is necessary to conceive new spatial, sociocultural and political tools that allow learning and shared creation, as well as communication to stimulate strategic thinking and forge a realistic dialogue between stakeholders in the territories of a port city”.

The program and contents of this meeting, in which PortCityFutures, UFM and TU Delft collaborate, can be consulted in full at the following link: 35 RETE Meeting

RETE is an international non-profit organization interested in promoting collaboration between ports and cities, in analyzing and interpreting the dynamics and phenomena that manifest themselves in their relationships, in exploring their horizons and in drawing visions and strategies that contribute to building their future.